When he rose to mega success with Death Wish in 1974 he had already appeared in over 130 movies and TV shows.
He was an older guy and people just loved to see him smack young people around.

After his breakout role in Death Wish he had a role in a film called Break Out.

Hello? Are you all still here? Did anyone get stuck in that last sentence? Good.

Anyway, around the time of Death Wish he made three films I like to call... 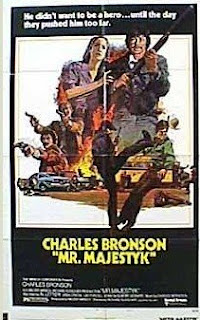 The tag line was "he didn't want to be a hero... until they pushed him too far."

See, after being pushed he decided he really wanted to be a hero. He then went to hero school and study the ways of the hero and eventually he was hero-esque.

In the film he plays Vince Majestyk a man who's name is spelled funny. That might be why they pushed him.

Next was the 1977 film Telefon. In this one, Bronson beats punks to death with a telephone... uh... telefon. That's what the poster implies.

Bronson is shown smashing the phone in YOUR face.

Be honest, you probably deserve it.

The tag line was "they'll do anything to stop Telefon."

I would have just unplugged it, but that is why I am no Charles Bronson.

The last film of the Typo Trilogy was 1980's Caboblanco. 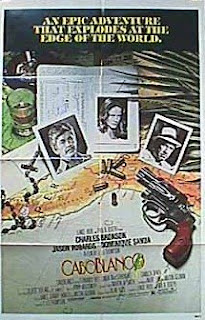 The tag line was "an epic adventure on the edge of the world."

I would have just said "like Casablanca, with more o's."
Posted by Guy Hutchinson at 10:31 AM