Maybe you heard this before, maybe its news to you. Either way, it should still surprise you. 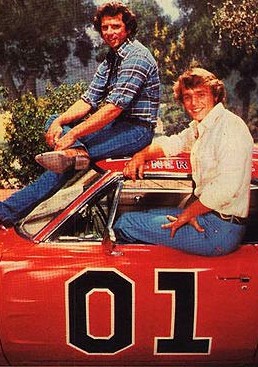 During the run of the hit TV show "The Dukes of Hazzard" the orange 1969 Dodge Charger, named "General Lee" received more letters than any of the human co-stars.

According to a 1982 TV Guide article, the automobile received 60,000 letters a month.

I can only assume that if the General Lee got the most letters, Daisy Duke's shorts must have been second followed by Daisy Duke.

During a recent tour of the Warner Brothers back lot I discovered a bag full of unanswered letters to the General Lee. They were fascinating.

In the past I have used this column to give advice, answer junk mail and babble incoherently about a pregnant Arnold Schwarzenegger.

This time I decided to answer the letters to the General Lee.

Dear Billy,
Thank you for writing, I always enjoy reading run on sentences from third graders. My mail box says nothing because - MAILBOXES DON'T TALK!! Get it? Well, you are writing fan mail to a car, so I guess you don't get it.
No, I am not related to Bruce Lee and I am not Chinese.
Thanks for writing.
Sincerely,
The General Lee


Letter #2
Dear Duke's Car,
I love your show! I have been writing fan letters to Catherine Bach (Daisy Duke) for the past two years. She never writes back! I am 35, single and I live with my parents. I think she can relate to that because on the show they live with Uncle Jesse.
Anyway, I am so deeply in love with her that I spend most of my day making out with a Daisy action figure. Could you tell her to write back? Please!!! And ask her to marry me. If she won't marry me I would just kill myself!
Thanks,
Corey Handlee
Bloomington, MN

Dear Corey,
Daisy doesn't care about you. You should kill yourself. Feel free to suck on my exhaust pipe.
Sincerely,
The General Lee


Letter #3
Dear General Lee,
Since both Bo and Luke sit inside of you a whole lot, maybe you can answer a question for me: who has the firmer butt?
Signed,
Katie
Fort Bend, ID


Letter #4
Dear General Lee,
Do you know Herbie the Love Bug? Can you get him to send me an autograph?
Love,
Patti
(No address given)

Dear Patti,
No, I don't. Am I supposed to know him just because I am a car? Well then, do you know Jimmy Carter? Could you get him to do something about the high gas prices? Idiot.
Sincerely,
The General Lee


Letter #5
Dear General Lee,
Do you and Uncle Jesse "party" (and I think you know what I mean by "party")?
Bye,
Ted Ward
Lima, OH

Dear Ted,
I think I know what you mean by "party" and yes we do. Often we put on our "party hats" and play some "pin the tail" on the "donkey". Other days we eat a lot of "cake" and blow out the "candles". Yes, me and Uncle Jesse from the 'Dukes of Hazzard' do like to "party".
As for Uncle Jesse from 'Full House' we never "party". We just do drugs and pick up hookers.
Posted by Guy Hutchinson at 8:53 AM